Birmingham-based composer and educator Kirsty Devaney writes about how conducting gave her new musical inspiration and helped her to rediscover her musical voice.

The RPS Women Conductors Phase 1.5 Workshop came at a time when I was starting to question my career path. I was completing my PhD,  working as a composer and music educator alongside. After a long period of writing my thesis, my own musical confidence had been waivering and I was needing a fresh musical experience. I had been researching education for the last 4-5 years; my identity as a musician was becoming more ambiguous. Was I more an academic than a performing musician? Or was I an educator more than a composer? END_OF_DOCUMENT_TOKEN_TO_BE_REPLACED

Karin Hendrickson reflects on the way the RPS Women Conductors programme is providing women a unique way to develop and share their voice.

There are some avenues of life that cause us to become soldiers for the generations that follow us. I think of the women who first marched and demonstrated so valiantly in order to gain the right to vote – I believe that they understood it wasn’t just so that their voice could be heard during their lifetime, but so that every following woman in their own lifetime could be heard, as well.

In my work as a conductor, I have a unique way of sharing my voice. In the performance, I’m the single person on stage NOT making any sound – yet through physical gesture my voice is perhaps symbolically the loudest, and the most uniquely displayed.

It’s this unique way of ‘having a voice’ that has caused the RPS Women Conductors programme to take notice of a certain disparity among the younger ranks of women. We live in a society that is incredibly vocal – your voice can be online, it can be heard, it can be read, yes – it can even be ‘seen’, and yes, it can insidiously still be silenced. And for younger women, living in a tumultuous time of peer-to-peer judgement, ever changing socio-economic systems, and growing up during a time where a phone or computer with predictive text can type your sentences for you – how do you learn to express your own creativity, your own voice, confidently, with all of these elements in play?

The workshops we run are therefore not just about conducting. We begin our workshop from the standpoint of what it is to ‘be a conductor’, but the total workshop experience is really about helping these women explore and develop their own ‘voice’ of confidence – to develop an awareness not just of what they are ‘saying’ with their vocal chords, but also how they are ‘saying’ it with their bodies, their posture, their gestures, and their face and eyes.

The workshops include many elements of physical posture and movement. We explore confidence, and how that translates to expressing who you are as an individual and a creative human being. By the end, we also will have explored physical conducting and musicianship. But the final goal is not to end up with a room of confident female conductors – the end goal is to end up with a room full of women more confident and prepared to be their unique selves.

The RPS Women Conductors programme curates a range of conducting experiences, from introducing novice female musicians to conducting, to helping full-time, professional female musicians who want to transition into conducting as a profession gain valuable experience. But our work in schools takes on another element, that of helping to develop confidence in women. We may end up with some great conductors along the way, but we’re first interested in making sure women everywhere have the confidence to be themselves, with their own voice.

This year we’re sponsoring the RPS Women Conductors programme in order to enable more women across the UK to have access to these training and development opportunities.

The RPS recently announced a new partnership with Women Conductors, the internationally award-winning programme of conducting workshops designed to support and encourage women to be conductors of classical music. Here is a guest blog from Becky Chalmers – a recent Phase 2 workshop participant – who strongly urges anyone considering a Women Conductors workshop to “just do it”!

I’m not a conductor. So why then have I recently found myself stood up in front of professional orchestras on two occasions with the role of conductor?

The first was a private event where I was given the score along with a brief conducting lesson in the taxi en route to the rehearsal. (I asked someone to get a photo that I could send to my mum.. I think my facial expression pretty much sums up how I was feeling at the start!)

My second experience was a day of 3 educational concerts for 6 year-olds. This time I got to conduct dressed as a skeleton (we had based the pre-concert workshops on Danse Macabre) and was definitely saved by my skills as an animateur!

So, I had two options. Either to say no to these opportunities because “I’m not a conductor”, and in doing so setting myself a limit for my career at the grand age of 28. Or, I could just get over myself, drop the excuses and do something about my lack of conducting skills.

I poured myself a large glass of wine and Googled “Conducting Course London”. After sifting through a few uninspiring entries, my attention was drawn to Women Conductors @ Morley College. Now with the Royal Philharmonic Society, these courses are designed to get more women conducting, from full time students/recent graduates aged 16+ to older music professionals and teachers.

I couldn’t quite believe it. There was a course specifically for Animateurs and Music Leaders on the one weekend I wasn’t due to be working. I had missed the application deadline but Alice Farnham, international conductor and the founder of these courses kindly let me take part regardless of this. I had no idea I was in for such an inspiring weekend.

We were given some orchestral repertoire to prepare as well as some Beethoven Piano Sonatas. I wasn’t at all sure what to expect, and had a last-minute rush to buy a baton in case we needed one – didn’t want to be the person that came unprepared!

On the Saturday morning I arrived at the venue, Kings College London, to be greeted by a room of about 9 equally apprehensive-looking women. However Alice, the course leader, instantly put us all at ease with her approachable manner, none of the stiffness or formality you might expect when imagining a conducting course.

What followed was an incredible two days of lea 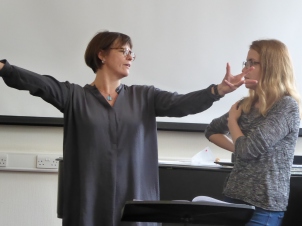 rning, personal development and laughter. There was absolutely no judgement between participants and instead the room was filled with sense of playfulness – the type of fun yet focused environment that frees everyone up to do their best. We all had different reasons for taking part yet shared a desire to learn as much as we could and get the most out of the two days as possible.

We learnt a lot about technique and used Beethoven piano sonatas to learn beat patterns and how to do a “bounce” and “circles” for legato. We focused on giving clear upbeats full of character and eliminating extra unnecessary body movements such as nodding on the first beat of every bar or bending knees!

Another theme that ran through the course of the two days was that of open and powerful body language. We even started Day 2 with some “power poses” which I have used since and found to really work! (If you don’t know what I’m talking about, have a quick watch of this: https://www.youtube.com/watch?v=Ks-_Mh1QhMc Try it! (Probably best in private… 😉

Something else that helped me a great deal was a concept Alice introduced to us about holding the sound as a physical thing, Imagining picking up the sound rather than putting it down – keeping hold of the sound as if it actually is something. Almost like moving through water, there is a slight tension in the movement. I found this idea really changed the way I think about conducting.

We were joined by two wonderfully supportive and encouraging repetiteurs, Fran and Nick, who stayed with us until the Sunday lunchtime. They were constantly giving really helpful feedback and were a really integral part of the weekend.

On the Sunday afternoon we then had the opportunity to take what we had learned and conduct string players who were alumni of the Southbank Sinfonia. This was again another great experience from which we gained a great deal. It was different altogether from conducting Fran and Nick on piano and posed different challenges.

For me, this course was invaluable. It has filled me with a new level of self-confidence and I have already seen positive results in my working life. A few weeks after the course I was conducting an orchestral performance consisting of beginner instrumentalists alongside professional players. After the concert, a violinist who had been in the orchestra I had conducted a few weeks before asked me what I had done to improve my conducting in such a short space of time. A percussionist also remarked that I now have the face of a conductor.. (not exactly sure what that means but I think it’s a compliment so am going with it!) Another player came up and simply shook my hand and gave me a smile that said it all.

The importance of these courses cannot be underestimated. As a teenager, I was too shy to even tell an audience what my name was and the name of the piece I was going to perform. I was also too scared to do anything if I wasn’t 100% sure I was going to be really good at it (the limiting effects of perfectionism). If you had told my 16-year old self that I was going to make a living out of standing up in front of groups of people and getting them to make music together, I would have thought you were mad. These courses give people like me an opportunity to come to conducting a bit later and to learn in a safe space and develop skills that allow us challenge ourselves and develop our careers further.

Not only does it give us great learning opportunities, it also gives us access to a network of many other young women who are in a similar position. This is incredibly valuable as a freelance musician as although it is a wonderful career, I sometimes find that working for yourself can feel a bit isolating.

My advice to anyone who is considering doing one of these courses is simply to just do it. There is absolutely nothing to lose and everything to gain…

Women Conductors is now entering an exciting new stage as it partners with the Royal Philharmonic Society. Check out the details and book now for the upcoming Phase 1 course here: www.womenconductors.org.uk/workshops/phase_1

I have been so inspired by this course that I intend to form a small orchestra that meets occasionally to provide an opportunity for conductors to put what they are learning into practice. If you read this and would like to get involved either as a player or conductor drop me an email. Alternatively, if you are able to help in another way, perhaps knowing of affordable (free?!) rehearsal space or helping with printing of music please also get in touch 🙂 – becky@beckychalmers.com

This is a featured guest blog from Becky Chalmers: www.beckychalmers.com
Twitter: @beckychalmersMD

The Royal Philharmonic Society is for people who love music and live music-making, and who want to ensure a vibrant future for classical music.

For over 200 years we’ve been at the heart of music: supporting and working creatively with talented young performers and composers, championing excellence, and encouraging audiences to listen to, and talk about, great music.